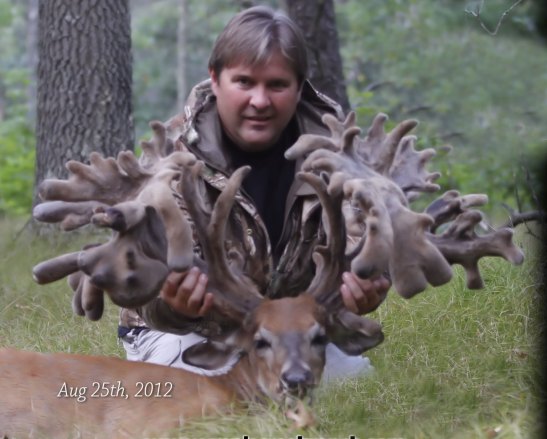 What may be the biggest whitetail deer ever harvested by a hunter was taken August 25 at the Apple Creek Whitetail Ranch in Gillett, Wisconsin. The 4 1/2-year-old buck was shot by Apple Creek’s owner, Scott Follett, and green scored 547 inches. There is a 60-day drying period required before the buck can get a certified score, but it is looking very much like it will be the next world record.

If the official score comes anywhere close to 547 inches, then this Apple Creek buck will be the new world record.

Two weeks prior to the deer being taken, SCI Master Measurers Herb Atkinson and Chris Emery were at Apple Creek conducting a measuring seminar. After the seminar, they were given a tour of the 1,500-acre operation and spotted the enormous buck. Last year, the buck’s shed antlers had scored 444 inches, and now looked like it would beat the previous record of 492 2/8.

When asked if Apple Creek can grow even bigger bucks, Follett was confident that the 547 score was “pretty easy to beat.” Not only has this record buck passed on its genes, but the ranch also has a yearling buck that already scores 412.

This entry was posted on Wednesday, September 19th, 2012 at 6:55 pm and is filed under News & Updates. You can follow any responses to this entry through the RSS 2.0 feed. Both comments and pings are currently closed.