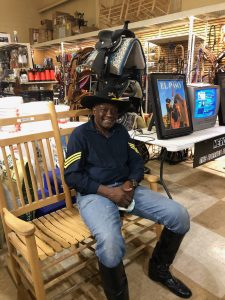 NEW BRAUNFELS, Texas — Ulysses Davis has dedicated his life to teaching the history of the Buffalo Soldier.

“I didn’t even know they were real,” Davis said.

He says it was a piece of American history he was never taught. So after serving 10 years in the US Army he got on his horse and started singing their praises.

“I pieced together this uniform, read up on the history of the buffalo soldiers and started doing a lot of parades,” Davis said.

In 1886, Congress created six all black peacetime regiments that were later combined into four regiments known as the Buffalo Soldiers. They were a vital part in the nation’s westward expansion, without getting much of the credit.

Espinosa says the Buffalo Soldiers were the ones protecting the settlers, and building many of the roads and infrastructure that still stand today.

“They made it easier for the white soldiers to come in because once they got there they knew the Buffalo Soldiers weren’t going anywhere,” Espinosa said.

At the New Braunfels Feed and Supply store it’s a piece of history Davis says he’ll continue to share for as long as he’s physically able too.

SAAACAM says they’re launching their Black History film series on September 3rd. People will be able to watch and learn in more detail the contributions made by the Buffalo Soldiers.