Alan’s Answers: How Do You Control Grassburs?

What are grassburs and how do you prevent them from invading your lawn? 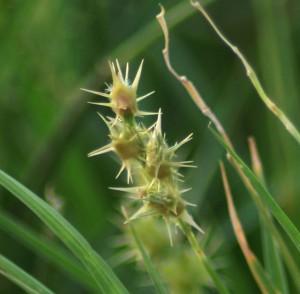 Now is the time to apply pre-emergent herbicide every 6 weeks through the end of September. We stock Amaze, XL Herbicide, and others. We also offer organic treatment, such as Corn Gluten Meal.  Our trained sales staff can help you choose the best product for your specific application. Pre-emergents are only effective at certain times during the year, which is late August through October in South Texas. Read more below on how to apply pre-emergent herbicide to your lawn. 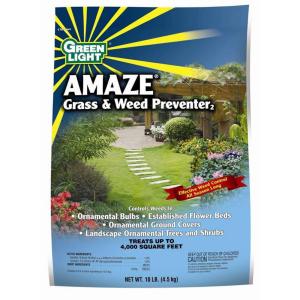 Field sandbur (grassbur) is a summer annual grassy weed that can be found in home lawns, sports fields, parks and along roadsides. This weed is especially adapted to dry, sandy soils but can be found growing in other types of soils as well. The big problem with this weed is the sharp, spiny burs that are part of the inflorescence. These burs can be painful and are difficult to remove from clothing material. Field sandburs (grassburs) generally start germinating in late spring and will continue to germinate until late summer or early fall months. This weed will continue to grow until the first hard frost or freeze occurs in the fall.

Field sandburs (grassburs) are generally not a problem in well-maintained turfgrass areas. With proper fertilization, mowing and irrigation, you can produce a turf that is dense enough to prevent sandbur (grassbur)s from becoming a problem. However, if field sandburs (grassburs) do become a problem there are several effective herbicides that can be used to control this particular weed. The most effective and efficient method of control is to use a pre-emergent herbicide. To be effective, these pre emergents need to be applied before weed seeds germinate — generally when the soil temperature (NOT the air temperature) reaches 52 degrees F. This usually occurs by March 15 in the central Texas area. In north Texas areas, apply the pre-emergent by April 1 and in southern areas of the state by March 1. Note: in south Texas and even in central Texas during mild winters the field sandbur plants will survive and act like a perennial weed. In these cases, a pre-emergent herbicide will not be effective in controlling these particular plants, but will work on any of the seeds that try to germinate. If a post-emergence herbicide such as MSMA or DSMA is used, wait until the day time temperatures are about 75 degrees F. for the products to be most effective. To insure complete control of germinating grassburs in heavily infested areas, extend the residual of the herbicide barrier in the soil and thus extend the length of control period by making applications of the pre-emergent herbicide EVERY 6 WEEKS through September. In areas with a light infestation of grassburs, two applications that are 6 weeks apart and after the initial application should control seed germination. As always, the pre-emergent application needs to be watered in thoroughly. Not applying enough water after application of a pre-emergent herbicide is one of the main reason for failure to effectively obtain control of the annual grassy weeds such as sandburs (grassburs).

REMEMBER: A dense stand of healthy grass provides the best weed control. Because most weeds are “opportunists” that invade weakened lawns, the fight against weeds starts with good management. All cultural practices such as mowing, fertilizing and watering should be done in a manner and time that will favor the grass rather than the weeds. Height of mowing influences competition against weeds such as crabgrass – the higher the cut, the lower the infestation. Frequent light sprinkling encourages shallow-rooted weeds and seed germination. Less frequent “deep-soak” watering that maintains a dry surface layer provides the grass with a competitive advantage.

Temperature, light, soil moisture and other factors determine the time and extent of weed germination and development. Some weeds germinate in early spring while others sprout in summer or fall. If conditions are favorable, a weed may be particularly abundant in a given year, but under different conditions the next year, it may be little in evidence.

Although most herbicides are formulated with reliable safety factors, application rates higher than those recommended may cause injury to turf and other ornamental plants. Many people over apply herbicides, especially when using fertilizer-herbicide combinations. The user needs to follow instructions on containers carefully to avoid overdoses.

Before weeds sprout from seeds. Apply two to four weeks ahead of germination. Less effective control may be expected if applied more than a month before germination. Applications should not be made until excess lawn clippings and leaf litter are removed. Irrigating immediately after application will help move materials down to the soil.

After weeds appear. Liquid sprays are more effective than dry materials, especially on hard-to-kill weeds. Apply post-emergence materials when weeds are growing vigorously. Tough old weeds are hard to kill, and if mature seeds are already formed, the lawn is likely to be infested again next year. Amine forms are safest because they give off fewer vapors that might damage other plants. Volatile ester formulations should not be used around ornamental plants. Select a time when winds are calm to prevent spray drift. Using wax bars or granules impregnated with herbicides near ornamentals will minimize such hazards.

Fertilizer-herbicide combinations are extremely popular because they combine two operations. Combinations with pre-emergence chemicals are generally effective since both the fertilizer and herbicide action are dependent on contact with the soil. Post-emergence herbicide action depends more on absorption by leaves, and granules in such combinations do not adhere well to smooth-surfaced leaves. They will stick better if applied when weed leaves are damp. “Weed and feed” materials present a conflict in desirable actions. Proper time for weed control often does not coincide with the most desirable time and rates for fertilizing. If used for follow-up fertilizations, there is danger of herbicide overdose.

Fertilizer spreaders can be used for applying granular herbicides. Be sure to adjust the spreader to apply recommended rates. If possible, apply half the desired rate in one direction and the remaining half at right angles to the first application.

A sprayer used for application of 2,4-D and related chemicals should not be used to spray garden or flower plants. Cleaning procedures are not always reliable. To be safe, have a separate sprayer for weed-killing purposes.

Eliminating weeds is of little value unless enough desirable grass is present to fill in bare spots. A reseeding program deserves first consideration if the turf is so weak that it will not recover once weeds are eliminated. Study soil and other conditions to determine reasons for low vigor of the original turf.

This entry was posted on Sunday, August 2nd, 2020 at 9:54 am and is filed under Alan's Answers. You can follow any responses to this entry through the RSS 2.0 feed. Both comments and pings are currently closed.