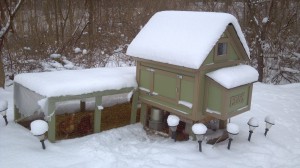 The Cold Coop: What to do..and not to do!

What are some of the things that produce heat in the coop and thus tend to warm it up? Well, chickens themselves produce heat. A single 5 lb commercial laying hen produces something like 10 watts of heat, so having 10 chickens in the coop is about the same as running a 100W lightbulb. Sunlight coming through windows will warm the coop air and whatever the sunbeam falls on; sunlight will also warm the coop walls and roof, which may then radiate some heat into the inside of the coop depending on whether there’s insulation in the way. Passive solar devices, some of which are quite easy to construct, can capture additional heat. If your coop floor is dirt or slab, i.e. it’s built directly on the ground, then for as long as the ground is warmer than the air it will be another slow steady source of mild warmth for the coop, until mid to late winter when the ground becomes just as cold as the air. And of course some people use additional electrical heating devices such as lightbulbs, heatlamps, infrared emitting heaters, etcetera.

As far as processes that remove heat from your coop, and thus tend to make it cool down, there are really only two major processes to consider: radiant heat loss, i.e. that which insulation is intended to minimize, and air exchange that kicks out warm air and takes in colder air through vents, pophole, or air leaks. (Note that while wind chill can increase the rate of heat loss from your coop, it can never make your indoor air colder than the non-windchill outdoor temperature, although if your coop is drafty, there could be indoor windchill affecting the chickens. So when the outdoor thermometer says 0 F and with windchill it’s -20 F out there, the thermometer inside a nondrafty coop will not read lower than 0 F. Really truly.)

Source of heat input: How to make use of it:

Source of heat loss: How to minimize it:

And that’s not all. There are some other important considerations that affect how these heat inputs and losses will affect your coop. For instance, your main concern will be nighttime low temperatures, so the more daytime warmth you can store in the coop overnight, the better. “Thermal mass” describes how well a structure or material absorbs heat for later release. Things like shavings or wood or insulation or air have fairly low thermal mass; things like concrete, stone, an earthen floor, and big jugs or barrels of water have a relatively high thermal mass. The more thermal mass (total) is incorporated into the indoor part of your coop, the more stable indoor temperatures will be. The coop air will warm less during the day, because much of the heat is going into changing the temperature of those materials; but then that warmth will be slowly released at night so the coop does not get as cold before the sun comes up again.

Incorporating high thermal mass materials into your coop’s inside is especially valuable if you are using some sort of passive solar heating device, such as a popcan heater or a greenhouse-like enclosure; but even if all you have is the normal daytime warming of the outdoor air, plus sun through the coop windows, the more thermal mass you’ve got in there, the less temperatures will drop at night. (Excessive thermal mass can cause condensation problems on occasional unusually-warm late-winter or early-spring days, though; this is not a reason to avoid it, just something to foresee).

Other factors affecting temp: How to manipulate them for a warmer coop:

There is a common misconception that in the cold North you need a small tight snug coop to concentrate chickens’ body heat… a coop “small enough that the chickens can keep it warm”. On the contrary, there is NO SUCH THING AS TOO LARGE A COOP. By partitioning off part of it (either a coop-within-the-coop type arrangement, or a drop ceiling or hover or suchlike to keep body heat near the roost) you can have the best of both worlds — a warmer area for the chickens and lots of room for them to utilize when the weather makes them reluctant to spend much time outdoors. Actually I would argue that in cold winter areas, you ideally should have a LARGER coop (more space per chicken) than you would want in, say, Hawaii — simply because the chickens are likely to be shut in, even if only voluntarily, for long periods of time and you don’t need them getting crabby and pecky and starting habits that may be hard to break.

Just because it is, say, -20 F outside does not mean it’s necessarily that temperature inside the coop. Indeed, unless you have vast amounts of ventilation open, or a pretty small and uninsulated coop, your coop will almost always be warmer than the outdoors during the cold part of winter… yes, even with some vents open! You may look at your coop temperatures in September and doubt me. But in fact, this effect becomes much more pronounced as the outdoor temperatures get colder, with the temperature differential being greatest on the very coldest nights.

The larger your coop is, and the more thermal mass it has, the greater this effect will be. A slab, sand/gravel, or earthen floor will also increase the difference between indoor and outdoor temperatures. And of course, the more insulation you’ve installed, the greater the indoor/outdoor difference.

Do you need to insulate your coop? You probably do not absolutely NEED too – except in the very coldest regions, chickens will not die in an uninsulated coop, especially if you supply additional heating – but it will sure make your chickens more comfortable and your coop easier to manage. By helping your coop hold warmth better, insulation will allow you to have a bit more ventilation open without excessive cooling of the coop, and that will make it easier for you to keep good air quality in there.

Why you need good ventilation even when it’s really, really cold

The biggest mistake you can make is to say “ooo, it’s cold, I’d better shut the vents up so I can keep in all the warmth I can!”. You do avoid a bit of heat loss this way, but what you mostly avoid is MOISTURE loss… and humidity probably causes as much or more cases of frostbitten chickens than cold does per se. Chickens can get frostbite in air that’s barely below freezing, if it is damp air (or worse, damp air with a draft blowing at the chickens) — yet most breeds are pretty cold-hardy in DRY air, being good down towards 0 F or in many cases well below that.

So even if it is cold, please resist the temptation to shut the vents. I’m not saying there may never be a time when a person might take the calculated risk of shutting them overnight, although blowing snow in a hard wind would be a likelier reason than cold per se… but if you do it some night, make sure the coop is as clean and dry as possible, and I wouldn’t do it in a very crowded coop (chickens themselves put out a whale of a lot of moisture, from poo and breathing).

The best arrangement for cold-weather ventilation is probably to have vents high on several walls, so you can close down the upwind vents when necessary and leave the downwind ones open. High vents will get rid of the warmest air — and that is what you want, yes it really is, because that’s the air that holds the most moisture and thus gives you the most “bang for your buck” in terms of dehumidifying the coop for insurance against frostbite. I know, it sounds perverse, but truly, getting rid of the warmest air (even though it cools the coop a bit) is the best way to avoid frostbite.

What temperature is ‘warm enough’?

This is probably everybody’s bottom-line question. The answer depends partly on your chicken breed — some, especially bantams and breeds very large single combs, are less cold-hardy than others — and partly on how dry your coop air is. In some climates, it is harder to prevent humidity from being a problem, simply because outdoor relative humidity hovers around 100% for most of the winter. But for most of us, having fewer chickens in the coop, more (well designed) ventilation, removing droppings frequently (a droppings board under the roost, cleaned every morning, works wonders!) and eliminating any leaks will keep coop air in good shape. Commercial chicken barns aim for roughly 50% humidity, if you want a number; but in a backyard coop it need not be that precise.

So what IS warm enough, for cold-hardy breeds in a well-run coop? Sorry, it still depends, and you will have to keep an eye on your own chickens to decide if they’re having trouble or not. If they’re huddling in one place all day, or reluctant to move, or moving “slowly”, then it is probably time for electrical heat; same goes for any visible signs of incipient frostbite, such as a change in the color of the points of the comb. But if you want a ballpark rule of thumb, cold-hardy breeds in a well-run coop are generally just fine well down towards 0 F, and often considerably lower (sometimes to -20 or -30 F!).

During a real “cold snap”, make sure the coop is clean (thus dry), add extra bedding for them to snuggle down into for warmth, make sure their roost is wide enough for their tummy feathers to cover their toes when they roost (the wide side of a 2×4 works well, or a *wide* dead tree limb), and make sure they always have lots of food available, and liquid water.

One excellent feature for a cold-weather coop is a max-min thermometer. I like the mechanical ones rather than the electronic ones, because AA batteries often die in very low temperatures. Mount a max-min thermometer at roost level in the coop and get in the habit of checking and resetting it daily; this way you will learn how your indoor coop temperatures relate to outdoor temperatures, and how that changes with colder and warmer weather. In a few months, you’ll be able to look at the weather forecast and decide with good certainty how much ventilation you should leave open, and whether the birds will be warm enough overnight.

Don’t get too hung up on thermometer numbers, though. In the end, what really matters is how your chickens are doing. “The eye of the master maketh the cattle fat”; it also maketh your chickens healthy and happy through the winter. Don’t jump to conclusions based on how you would feel if you were out there in that weather, do what the chickens tell you, and you’ll be fine.